We were honored to get some love from entertainment news site SugarBang.com.  Here is a lil bit: Sugarbang was lucky enough to have a question and answer session with Jason O. Silva, author of the recently released novel "The Tale of Edgar Trunk." Check out our interview, and be sure to visit WWW.EDGARTRUNK.COMfor more information on the book and where to buy it.
SUGARBANG: How long have you been writing?
JASON O. SILVA: I've been writing my whole life.  I love it.  But I tried everything to NOT be an author.  That didn't work out.
SUGARBANG: How long have you been working at the concept of Edgar Trunk and his adventures?
JASON: Edgar Trunk appeared in a story about 13 years ago as an energetic young man who worked at a daycare. Years later, after a particularly vivid dream, I got a sense of this rugged, dark, and industrial landscape with a factory.  It got me thinking about why this place ended up this way.  The more I explored the concept, the more real it became.  Eventually, I needed a hero, and Edgar Trunk resurfaced.  Only this time, I made him 10 years old and much less worldly.
SUGARBANG: Without giving away too much, a great deal of the book is spent inside and around Edgar's home, The Factory, as referenced in the title. Where did the idea of this place come from, and how did you develop it?
JASON: I was on a family outing that took us to Detroit.  There I saw a factory on an island, called Zug Island, and it made such an impression on me that I just knew Zug Island was the place.  Later, I dropped the reference to Zug Island, because I didn't want to single out Detroit.  In Edgar's Tale, the island is much farther away and much, much worse.
Read the Rest here! 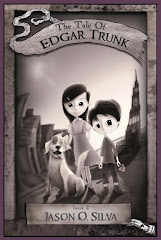